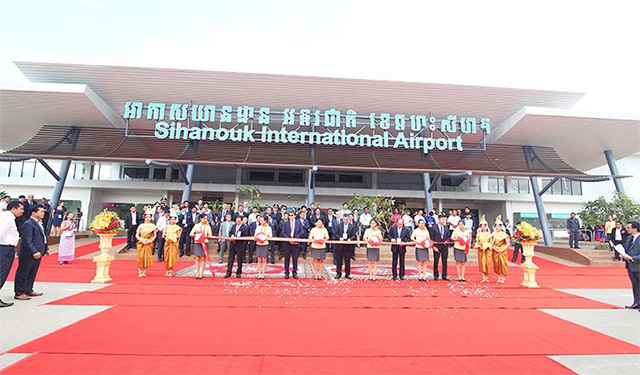 The terminal’s renovation is part of an ambitious plan by Cambodia Airports, the company that manages all international airports in the Kingdom, to revamp the airport to prepare for a projected hike in passenger traffic as Sihanoukville enters the radar of more and more tourists in the region.

According to a statement from Cambodia Airport released yesterday, the airport’s renovation programme includes an expansion of the airport by as much as 80 percent of its current size, a “total revamp” of facilities, (particularly the check-in area, boarding lounge and baggage claim zone), and the installation of new equipment, including a baggage handling system.

Nicolas Notebaert, president of Vinci Airports, Cambodia Airports’ mother company, said the terminal’s soft launch is a testament to the company’s and the Cambodian government’s commitment to improving air transport in the country.

“Today’s ceremony marking the commissioning of Sihanouk International Airport’s new terminal reflects the successful partnership between the Government of Cambodia and Vinci Airports.

We are actually taking a new step in our journey to develop Sihanoukville airport so that it contributes to unlocking the economic, touristic and social growth potential of the Kingdom’s entire seaside,” he said.

Taing Sochet Krisna, director of the Tourism Department in Preah Sihanouk province, told Khmer Times the renovation of the terminal was a natural outcome of the rise in popularity of Sihanoukville as a tourism destination.

“Our policy is to attract more and more tourists as well as investment into the province, and, in this regard, the renovation of the terminal of the airport is key to the provision of a better and more convenient service,” he said.

He said the province’s airport now has a great number of air connections with countries in the region, particularly China, Malaysia, Vietnam and Thailand. “I expect that within the next two years the airport will be handling flights from even more distant countries.”

According to Cambodia Airports, the next part of their renovation programme for the airport in Sihanoukville comprises the extension of the runway by 800 metres to reach 3.3 kilometres. “Once completed, the airport will accommodate on a regular basis bigger aircraft and flights from farther markets, especially from other parts of Asia.”

HOW CAN WE HELP?