Vesak Bochea Day, or simply "Buddhist Day," as it is more often known, is one of the days most significant festivals of the year for Buddhists in various regions of the world. It was even formally acknowledged as a crucial religious event by the United Nations in 1999.

Here's all you need to know about Vesak Bochea Day in Cambodia, as well as why you should go.

What is Vesak Bochea Day?

The majority of South and Southeast Asia commemorate the festival. It's interesting to note that not all of the Buddhist world observes it, since other countries opt to commemorate certain festivals at various times.

Aside from all the temple-based events and celebrations, one of the most important aspects of the day is doing things for others. On Vesak Bochea, Cambodians will give support to those who are less fortunate than themselves, offering gifts and help to old, sick, or disabled people.

The ceremonial date of Buddha’s birthday fluctuates due to the Buddhist lunar calendar. It is held and celebrated on the full moon day, which usually occurs at the end of April or the beginning of May. Throughout the day, Buddhist from every corner of the world will gather at their local temple to memorize Buddha’s birth by chanting hymns and making offerings to the monks. 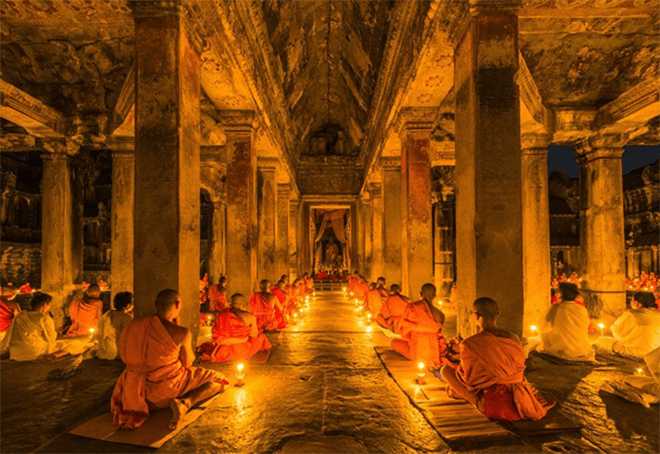 Where is Vesak Bochea Day held?

The largest Vesak Bochea mass gathering in Cambodia often takes place at Preah Reach Troap, a grand temple about 40 kilometers (25 miles) north of Phnom Penh. Numerous crowds of people congregate at this mountaintop with its religious treasures and artifacts.

What is on Vesak Bochea Day?

The day is unexpectedly full of exciting activities. In and around temples, shrines, and pagodas are where the majority of Cambodia's ceremonial and official ceremonies take place.

On Vesak Bochea, a large number of Buddhists get up early to congregate in temples before sunrise. They'll light candles, present flowers, sing hymns, and express gratitude to Buddha here.

The temples themselves are frequently modestly and sparingly adorned. In addition to Buddha statues, artwork, sketches, flowers, and decorations may be used to beautify them.

Others will donate money to charity or donate their time to charitable organizations. The majority of Buddhists likewise refrain from meat for the whole 24 hours.

Locals give priority to their friends and family throughout the celebration. Vesak Bochea is not only a significant religious holiday but also a significant family celebration on which Buddhists offer thanks to their loved ones by spending time with them.

Of course, Vesak Bochea is a fantastic time to visit Cambodia if you're a Buddhist. You are welcome to participate in the customary festivities and religious rituals to feel a part of something precious and unique.

However, it's a terrific time to be in Cambodia even if you're not religious. Many traditions are being lost in the modern world, and religion has largely given way to modernism. Particularly so in Cambodia, which is far less religious than many of its close neighbors. But on Vesak Bochea, you'll get to witness a whole other side of the country and discover that it hasn't quite abandoned its religious roots.

For Vesak Bochea Day, whatever region in Cambodia should I visit?

The ideal place to be at Vesak Bochea Day in Cambodia is a small town or village.

Less people practice religion in larger cities like Phnom Penh and Siem Reap, therefore religious activities there are sometimes eclipsed by daily activity. During the festival, being in these larger areas might occasionally be difficult.

Cambodia is an excellent location for seeing such incredible culture, and the temples appear even more remarkable on this celebratory day. So mix with the people, snap photographs, and celebrate Visak Bochea Day - enlightenment in Cambodian style.

Our Cambodia Immigration Services provide you with the convenience and speed e-Visa for travel to every corner of Cambodia. Feel free to evaluate and choose us as your journey companion.

HOW CAN WE HELP?